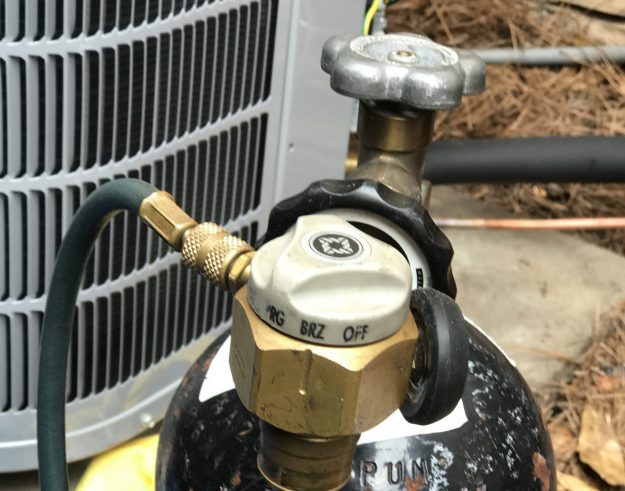 Why Your AC Installation Calls for Triple Evacuation

Central air conditioning systems, heat pumps, and ductless mini splits share a few key attributes in common. Chief among these similarities is the fact that all of these systems us refrigerant in order to facilitate the cooling process. Refrigerant is a heat transfer fluid that changes its physical state from liquid to gas and back again relatively easily. It evaporates in the indoor evaporator coil, removing heat from the air in the home, and is condensed outdoors to release that heat.

Now, low refrigerant levels due to an improper initial charge (a mistake that we simply do not make) or a leak is the first issue that most people would associate with refrigerant. It is not the only one, though. Quite often during new system installations, underqualified technicians will fail to properly clean out the AC line sets. This can leave behind a number of contaminants that can cause problems for your AC in Rome, GA. That is why triple evacuation cleaning is the way to go.

Are You Making an AC Switch?

Triple evacuation line cleaning is very important in the event that you are upgrading your old air conditioner to a newer one, specifically if you’re making the jump from an R-22 system to one using R-410A. It should go without saying that any air conditioner is only going to function properly when it is properly charged with the proper refrigerant.

What too many people fail to realize is that even small amounts of residue in the lines can cause problems. Remember, this type of material won’t just evaporate out the way that water might.

Isn’t It Better to Just Use New Lines?

Well, it might be, and in some cases new lines are used. However, there are also a lot of situations in which replacing a line set just isn’t the best course of acction. If the existing lines are running through walls, for instance, it may take more time (and money) to remove them and replace them than it would to properly evacuate them. Plus, even new lines will have to be cleaned out before being put to use.

So How Does It Work?

As you may imagine, triple evacuation requires the evacuation of the line set, well, three times. Does that sound like overkill to you? Just remember that doing a thorough job of evacuating the lines is going to benefit you for many years to come. Believe it or not, leaving even a small amount of residue in your AC line set can result in a breakdown eventually. Following strict guidelines when evacuating these lines is going to give you the best results. Throughout the process, we’ll—

After this triple evacuation, we can use a digital gauge to ensure that levels of contaminants are below the cutoff level. When the micron count is below this point, the job is done, and you can rest easy knowing that your AC and its refrigerant cycle are running smoothly.